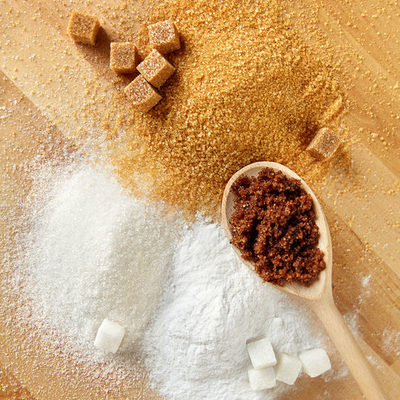 Sugar is naturally produced in plants during photosynthesis. It is the basic unit of carbohydrates. There are three types: glucose, fructose, and galactose. Sucrose, otherwise known as table sugar, which we use as a sweetener, is a mixture of glucose and fructose. This is obtained from sugarcane, sugar beet, sweet sorghum, maple, palm, honey, corn, and chicory. Of all these, sugarcane is the most prevalent crop for this.

Sugar can be consumed in different forms, such as:

Before sugar, honey was the main sweetener in most of the world. Somewhere around 800 BC, sugarcane began to be cultivated in Papua New Guinea. A different species originated in India almost simultaneously. It quickly spreads to China and Southeast Asia. The next step is the refining process which also originated in India. At this point, it was considered a medicine as well as a sweetener. Trading with the Arabs and Persians spread its use even further. It was during the Crusades that Europe learned about it and crusading armies brought it back with them.

With colonization, this sweetener gets a bad reputation. While the Portuguese and the Spanish used bonded labor and slave labor in plantations in the Caribbean, Puerto Rico, and Brazil, the British began to do the same in the USA, Sri Lanka, and Mauritius. By this point, it had become a necessity around the world.

But as colonized countries started fighting back and there were revolts from enslaved plantation workers, European middle class also began to boycott in solidarity, especially in Britain. All this led to a gradual decline of the bonded labor sugarcane plantations. However, even today, there are many child laborers in sugarcane plantations around the world.

With industrialization, this becomes less laborious and much cheaper. Soon, it is also discovered that it can be produced from sugarbeet as well and this becomes a popular alternative in Europe.

This sweetener can be good for the health of the brain, provided it is taken in balanced quantities. The brain requires up to 400 calories of glucose per day to function. However, getting this from sucrose is not a good option. Consumption must be limited to 30 grams per day. Over consumption can lead to an increase in the risk of heart diseases, diabetes, cancer, and other diseases. It can also lead to obesity, depression, and aging. It is very important to limit consumption in order to ensure that both mind and body are functioning properly.

The commercial production begins with the planting of sugarcane. After harvesting, the stalks are taken to mills where they are cleaned, washed, and milled to extract juice. This juice is then filtered to purify it. This purified and clarified juice then undergoes the process of vacuum evaporation, which eliminates most of the water from it, up to 65%. This concentrated syrup is then crystallized by further evaporation. The molasses is separated from the raw sweetener. The sugar crystals are finally dried and packaged for selling.

Sugar is regulated by the FDA, and is supposed to be in pure form for consumption. This and other sweeteners that don’t promote dental decay are also regulated. It is also important to accurately mention the total and added sugar content of any product.