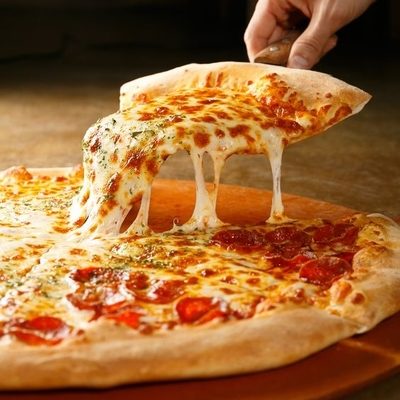 Pizza is a savory dish made of dough, sauce, toppings, and baked in an oven. The dough is a mix of wheat flour, yeast, water, and salt.

In the US alone, 350 slices are eaten each second.

According Taste Atlas, to the top 10 types of pizzas in the US are:

Flatbread with toppings eaten by the Egyptians, Romans, and Greeks are often considered the root of pizza. Although they did not resemble the modern-day dish until the 16th century when the first pizza was baked in Naples, Italy. In the 1600s, this dish was considered a cheap food for the poor and was badly seen by the Italian elite. Its reputation slowly evolved and by the 19th century, Neapolitans of all backgrounds ate it for breakfast, lunch, or dinner. In 1889, Italian royals visited Naples and enjoyed it so much that bakers named one after the queen, Margherita.

Because of this royal visit, this savory dish became popular all over Italy and traveled to the Americas with Italian immigrants. In 1905, the first pizzeria opened in New York and this continued to evolve with Chicago-style being born in the 1940s. This dish became nationally famous with the help of Italian-Americans stars like Frank Sinatra and Joe DiMaggio in the 1950s. Once the late 1950s rolled around, it had become common to find frozen pizza in American supermarkets. Today, this dish is a beloved dish all over the United States and can be enjoyed in many flavors, shapes, and forms.

The nutritional value of this dish varies depending on its crust, sauce, and toppings. A simpler pizza can have 273 calories, 11g of protein, 18g of fat, and 29g of carbohydrates for each 100g serving. If this dish has a white sauce, it can be even more calories. For more nutritional information, it’s best to read the full details on the packaging or menu.

From supermarket refrigerators to entire freezer sections, finding commercially produced chilled or frozen pizza is easy. Commercial production often happens with large machines for mixing, rolling, and slicing dough and conveyor belts for decorating with toppings. This dish begins with all purpose flour, yeast and salt mixed into a floury dough that is mixed then left for a few hours to rise. The dough is then rolled out in the appropriate shape and later sent down the decorating conveyor belt. After that, it is baked, cooled, packaged, and frozen or kept refrigerated before being sent off to stores.

Whether you love it with cheese or piled high with meat, it is a quick meal any night of the week. To enjoy this dish to the fullest, it’s best to store any leftovers properly. Leftovers should be sealed in an airtight container or bag and refrigerated. If stored correctly, slices can stay in the refrigerator for 3-4 days.

This classic southern Italian dish is certainly a crowd-pleaser. Here are some popular recipes:

The Food & Drug Administration maintains its strict labeling regulations. Restaurants that sell this dish or other food for immediate consumption must include ingredients and nutritional values for standard menu items. In regards to this, restaurants must include this information for the whole, part, or slice of this dish. For this reason, the FDA also recommends that each slice be exactly the same to save on time and effort.